For three years, Gus lived in a puppy mill. To be honest, I do not and cannot understand what his life was like. I am, even as a rescuer, unable to look at photos from puppy mills.

In 2010, he arrived in Park City at our no-kill shelter. Fostered by two generous big-hearted people, Debbie and Richard, he ultimately found his home in the Hooker Horde.

Almost six years later, he still needs to eat on the stairway landing where he can be alone and feel safe. But, after almost six years, he trusts me enough, as long as I don’t make eye contact, to walk behind him and carry laundry up and down the stairs. 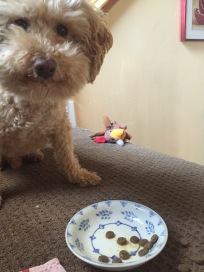 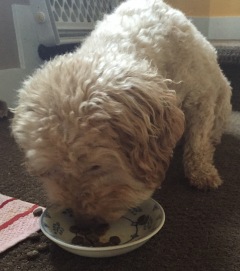 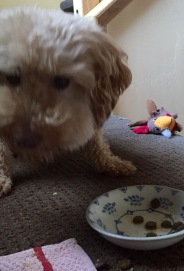 It took a long time, but Gus made me a “Marble Jar Friend.”

I'm a teacher, writer, and editor. In addition, I'm an animal rescuer, yogi, and friend.
View all posts by Julie Hooker →
This entry was posted in Dogs, life lessons and tagged Brene Brown, Marble Jar Friends, trust. Bookmark the permalink.