It’s Going to Be a DWIGHT Christmas

It’s Going to Be a Dwight Christmas After All

A few days ago, someone Dwight loved very much met me at my front door, handed me a box and told me, “Here. Here are some of Dwight’s ashes. He would want to be with you.”

“How did you get them?” I asked. “Do the girls know you brought them to me?”

Dwight died on January 3rd, 2015. Sometime between Christmas and the New Year, I was told he was sick.

From October 31st until he died, I left messages on his cell phone telling him what I wore for Halloween, what I made for Thanksgiving dinner, how I voted, and wanting to share the ideas from the most recent episode of Newsroom.

But, because few understand our relationship, his family did not tell me he fell, broke his arm injured his eye and then, complications from surgery required him to be on a ventilator.

One of our neighbors from Sundance told me, “You loved Dwight. Dwight loved you. That’s going to have to be enough.”

But, not saying goodbye in person and not being invited to mourn hurt. I remember how Dwight hurt when his ex-wife did not want to mourn their son with him.

I put Dwight’s ashes in the same tin in which we kept his son, Tommy’s, before we scattered them in the river in the meadow at Sundance.

Dwight in Tommy’s container next to the ashes of our pets.

Now, now they are together.

So, I am going to have Dwight Christmas. Well, even without his ashes, it would have been one.

Whenever he spoke of me, he referred to my home as “A Shrine to Dwight-y.” 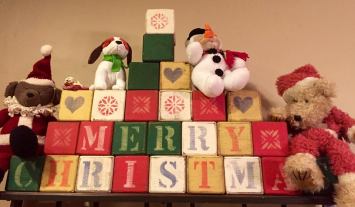 Our wooden blocks. We wrote messages using them. 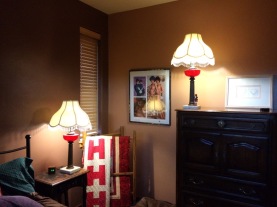 The lamps from Penny’s grandparents, the H quilt on the quilt rack, and centerfold of the twins in my shrine.

I still put up our tree, the tree we bought after we divorced. We decorated it with all of the ornaments we purchased in Hawaii and New Orleans when he lived in the condo at the base of Emigration Canyon.

There’s a little yellow school bus because Dwight was proud of his teacher wife. Bernese Mountain dogs decorate the branches.

My friend, Vicki, suggested I write about what having Dwight’s ashes with me portends.

I do know that I try to make Dwight proud of me. Every day.

I know that our pet psychic told me Dwight has not left me. When I wear the gold chain I gave him for our first Christmas, it is warm.