Between Grief and Nothing, I Will Take Grief

As an English major, I studied the essayist and poet, Walter Pater. Dwight and I discussed his writing driving to and from Sundance.

Dwight made the connection between Pater’s thoughts on memory and the novel, The Wild Palms by William Faulkner. (Dwight searched used bookstores to find a copy for me.)

When I wrote a paper on Walter Pater, Dwight offered me the final passage in The Wild Palms as a conclusion:

“Because if memory exists outside of the flesh it won’t be memory because it won’t know what it remembers so when she became not then half of memory became not and if I become not then all of remembering will cease to be. –Yes he thought between grief and nothing I will take grief.”

Just before he fell, he told me, again, “You are the keeper of my memory.”

Everyone, with whom Dwight connected, has his memory. Everyone has a unique experience with this great big man.

Annika emailed the story behind these pictures to me. I was not there, but now, they are a part of my memory. 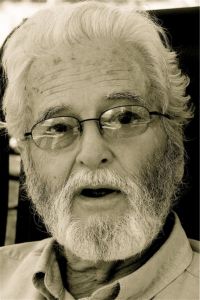 “We were just hanging out in the backyard in Midway. Mahan and Dwight were pontificating on the state of the world. I was probably working on in the yard and saw good lighting and captivating subject matter.” — Annika

I am a school teacher, animal advocate and rescuer, yogi, and happy!
View all posts by hookershorde →
This entry was posted in Uncategorized and tagged Dwight Hooker, memory, The Wild Palms, Walter Pater, William Faulkner. Bookmark the permalink.