I am not patient. It is not a quality I developed. In fact, I stand by Carrie Fisher’s statement that, “the only problem with instant gratification, is that it takes too damn long.”

Last month marked Gus’ four-year adopt-paw-versary into the Hooker Horde. His first three years were spent in a puppy mill.

At seven, he is finally a puppy!

The curly blonde woman at the shelter told me, “He may never be a real dog.”

Once he came home in 2010, he spent the first few days cowering in the back of his crate.   When I removed the crate, he found security sitting on the stairway landing. From there, he knows what is happening both upstairs and down. Plus, with the railing, it probably feels a bit like a crate.

After six months, I heard scratching on the hardwood floor. I peered over the railing to see Gus secure in his seat on the sofa.

The changes happened so slowly, that they seemed unremarkable at the time. But, now, he barks with happiness when we head out for a walk, he chases the ball with his brother, when I say, “go to bed,” he hops up on the bed and cuddles into the pillow. 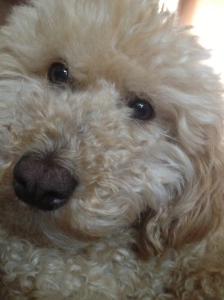 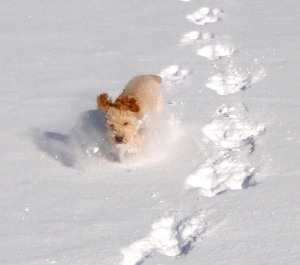 He still clings to the safety of his big Berner sister, Faith, when unknown dogs or people approach. 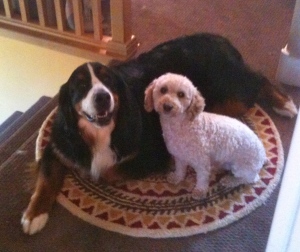 Often, he’ll sit opposite me and look at me. The pet psychic said he told her, “I love Julie and I’m better than any boyfriend she will ever have.”

Gus runs. He plays with toys.

While he does not like to be held, he tolerates it. 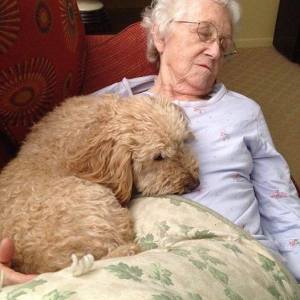 With patience, spirits and hearts heal.