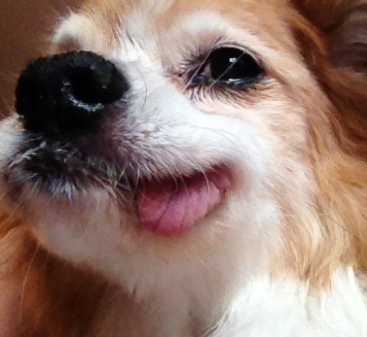 The Person that Needs Timmy the Most

As a hu-mom who celebrates animal rescue and believes that animals matter, I “friended” a number of like-minded people on Facebook.  Today, I found “shared” this post:  Dogs have a way of finding the person who needs them the most.”

I got the call yesterday.  Timmy was found running on 21st South in Salt Lake City.  21st South is a busy street.  He is lucky and the world is blessed that he wasn’t hit and killed.  A pair of senior citizens, like Timmy, rescued him and, somehow, contacted my friend, the Executive Director of a rescue.

When she called me and told me his story, I knew he’d be okay here, in the Hooker Horde.

Timmy’s about fourteen-years-old. All of his teeth have been pulled and his tongue dangles from his lips.

Timmy’s previous person is a veteran.  He served our country.  With PTSD, he had periods of time where he simply couldn’t care for Timmy and his other dog.  A few months ago, the two dogs were left alone in his apartment for a week.

When he arrived, at 1:15, he was shaking.  His whole world has been turned upside down and inside out.

We visited our veterinarian, Dr. Prior, at the Park City Animal Clinic.  He gave us delicious wet food that Timmy could eat.

I don’t think Timmy hears very well, but he goes up and down the stairs.  He can jump up on the sofa.

Timmy is a hero.

I'm a teacher, writer, and editor. In addition, I'm an animal rescuer, yogi, and friend.
View all posts by Julie Hooker →
This entry was posted in Uncategorized and tagged Facebook, PTSD, rescue dog, senior dog. Bookmark the permalink.