It’s been 25 days since the Bun, Mr. Sunny Sunny Bun Bun, passed away in my arms at the Park City Animal Clinic.

The Bun was little dog that left a really big empty hole.

The Bun had a demanding little voice that seemed to scream, “Me, me, me and more, more, more.”

I made a book on iPhoto for the Bun, baked BUNdt cakes, and hosted a Bon Voyage Bun party with balloons attached to quotes.

Inside me is unspeakable sadness.

Sitting with my neighbor, her two dogs, and my three, she said, “Without the Bun, it’s like we don’t have any dogs.”

In the last 25 days, I’ve seen others mourn the Bun.  Sweet little Ernesto came over the night he died and cried.  Christie helped me cut out quotes to attach to balloons for the Bun’s memorial.  And, almost daily, people post on his Facebook page.

I realize that grief is personal.

Saying “goodbye” is a process.

And, there’s no way out, but through. 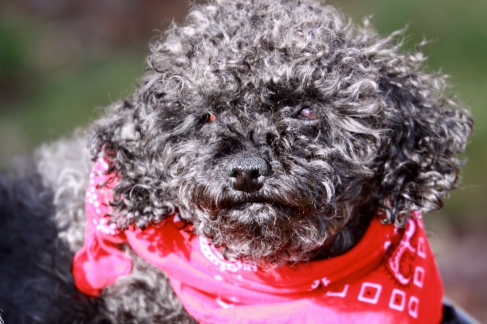 I'm a teacher, writer, and editor. In addition, I'm an animal rescuer, yogi, and friend.
View all posts by Julie Hooker →
This entry was posted in Uncategorized and tagged goodbye, senior pets. Bookmark the permalink.