You Gotta’ Have Faith 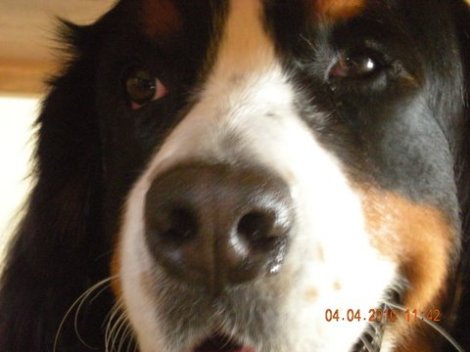 You Gotta’ Have Faith, A Bernese Mountain Dog

A decade after George Michael won a Grammy Award for his album, Faith, my Faith was born.

Faith was born on Labor Day.  Her mother didn’t get the memo and delivered the litter via c-section.  Weighing half as much as her littermates, Faith was named LoLo for her low birth weight and the nearest town to the breeder in Montana.

The breeder and her son took the eight puppies and rotated their feeding schedule.  Faith always got a little bit more because she needed it.  And, it worked.  They had faith and LoLo grew.

At eight months, Faith and her giant paws moved into my home.

Often, I’ll sing “’cause you gotta’ have Faith, Faith, Faith . . .” to her.  George Michael’s ten minutes of fame happens daily in my home.

In Eat, Pray, Love, Elizabeth Gilbert explains faith.  “Faith is belief in which you cannot see or prove or touch.  Faith is walking face-first and full-speed into the dark.”

Each morning, at 5:00 am, Faith and I walk face-first and full-speed into the cold dark mountain sky.

I gotta’ have Faith.

I'm a teacher, writer, and editor. In addition, I'm an animal rescuer, yogi, and friend.
View all posts by Julie Hooker →
This entry was posted in Uncategorized and tagged Dogs, Faith. Bookmark the permalink.